Goal to Be a Great Mom Tops Her List 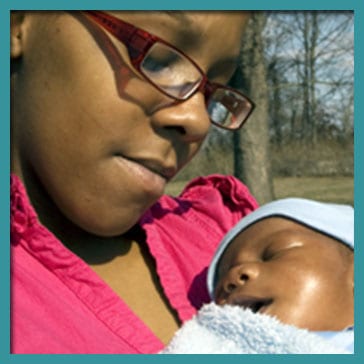 Natiba lost her mother at a young age, leading to placement in the child welfare system. She faced numerous changes and challenges in her young life, and as she moved on to her formidable teen years she began making poor decisions that would have a lifelong affect on her future. Natiba was getting into trouble and eventually dropped out of school.

At the age of 16, Natiba became pregnant and entered the Capable Adolescent Mothers program at Crossroads. She began to seriously consider the future she was creating for both herself and her unborn child. Wanting a better life than the one she had led so far, she began to evaluate options and decided on pursuing an education as a way to help her move towards success.

With a keener focus on her goals, life soon became very busy — she was attending Burlington County Community College for her GED when she gave birth to her son. His arrival helped her realize the her great new responsibility and she was more determined than ever to succeed for them both. She was committed to making better choices and staying out of trouble.

Natiba graduated with her GED in June and would like to further her education studying criminal justice so that she can work towards becoming a corrections officer.

The Capable Adolescent Mothers program has provided Natiba the support and encouragement she needs, which has helped her do well for herself and Xyi’Quan. The program staff supports her through ups and downs in her learning and growing process, and provides full time guidance and care for her son, as well.

Despite early adversities Natiba has continued on as not just a survivor, but a dedicated mother to her son. She continues to be counseled on parenting techniques, is practicing independence through life skills lessons, and is tutored on coping skills that will bring her to a stage of life where she can transition successfully into life on her own. She is grateful for the opportunities she has been afforded through the Capable Adolescent Mothers program, commenting, “I will be in this program to the end because I need to learn everything I can before leaving.”